Belemnites of the Speeton Clay Formation

Last weekend, as the lockdown and restrictions on travel were further lifted to allow for camping, we took full advantage and given the abysmal weather forecast at home, we spent the weekend on Yorkshire's Mesozoic coast. All my fossil hunting experience has been of Palaeozoic/Neoproterozoic, so this was a whole new encounter.

On the Saturday we arrived early at Bempton sea bird cliffs, which was populated by twitchers eager for a glimpse of the black-browed albatross that had been seen in the two days prior. On our way to the campsite at Fylingthorpe, we stopped off at a Speeton.
The Speeton coast is best accessed from Reighton Sands and is the only exposure of the Speeton Clay Formation. The Speeton Clay Formation is formed predominantly of, well, clay that was laid down from the Aptian- Middle Albian of the Lower Cretaceous (very approximately 100Ma). Speeton in the Lower Cretaceous was part of the Cleveland Basin and hence the fossils (marine) comprise of excellent ammonites, belemnites as well as 'Speeton shrimps' and reptile remains [1].

While we found a variety of fossils, including the oysters Exogyra and Gryphea, as well as the ammonites Simbirskites and Aegocrioceras,  the highlight was the plentiful belemnites.

Being opened up to a whole new source of inspiration, I wanted to do some reconstructions of the belemnites. I had previously looked at reconstructing an orthocone nautiloid, so I'd already done a fair bit of research on both orthocone nautiloids and belemnites. I had also recently bought some fine (3,1,0) sable paintbrushes, so I settled on painting a watercolour reconstruction of a belemnite. I've always been amazed at the fine watercolour paintings, executed in great detail, in identification guides, most notably one I grew up with - (a) field guide to the moths of Great Britain and Ireland, from artists such as Richard Lewington. A few years ago, I had also seen an advertisement for a 'palaeo-birdwatching' guide called a field guide to Mesozoic birds and other winged dinosaurs, by Matthew P. Martyniuk [2]- a concept that I loved.

After deciding I would paint a 'botanical-style' watercolour of a living belemnite (or perhaps a few!), I set upon research. This research would include a) the palaeobiology of belemnites and b) the biology of modern cephalopods.


When reconstructing belemnites, the main issue is that the majority of fossils are the belemnite guard (or rostrum). There is rare evidence of soft-tissue preservation from Lagerstätten, however, there is still little evidence for a number of potential features of belemnite morphology, such as large eyes and fins. Most of the soft-tissue specimens are from S England, S Germany and N Italy [3].
As a result of this lack of direct evidence for reconstructions, we look to extant relatives of belemnites- other cephalopods. Loliginid squids and sepiids (cuttlefish) are a good modern analogue morphologically speaking, as well as the deep-sea squid Spirula spirula, which bears and internal phragmocone [3].

In a brief Google Images search for 'belemnites' or 'belemnite reconstruction' there is a striking pattern- what I would consider a minor palaeoart meme- defined as having " repeated themes of detail, composition and design" [4]. Many reconstructions are coloured orange-pink- with minimal patternation. There is nothing inherantly wrong with this depiction - many modern cephalopods show these colours and they are completely feasible. However, when we look at modern shell patterns there is a plethora of colours and patterns- including (but not limited to) transparency, achromatism, monochromatism, iridescent colour patterns, irregular and regular spot patterns, transverse zig zags, chevrons, and radial or longitudinal stripes or bands [3].
Why is this not represented in modern reconstructions of belemnites? I believe this to have a number of contributing factors, but the main one is that a belemnite isn't a tyrannosaurus rex and as a result they will never achieve the same popularism that can result in the breaking of these tropes or memes.

After initially planning to reconstruct a single species, I finally settled on three species displayed on a single plate - that I would paint on a single A3 sheet. There is a wide variety of belemnite species that can be found at Speeton, but for simplicity's sake I chose the three figured in the British Regional Geology guide to the area from the Tees to the Wash [5]. These were Oxyteuthis brunsvicensis, Hibolites jaculoides and Acroteuthis lateralis.
To reconstruct the soft-tissue I had to choose two main aspects: the morphology of the fins and the colour/patternation. Both of these were to be taken directly from extant living species.


An initial sketch was made where the morphology (and general pattern) were planned out. The outline of this was then traced.

Then the trace was transferred onto the paper (Langton hot-pressed ultra-smooth for botanical illustration). In the case where an adult male and female were needed (in cases of sexual dimorphism), alterations were made, both for general appearance (e.g. the lateral fins curled in a different place) and the sexual characteristics (e.g. a specialised pair of arms with enlarged hooks [6]). A partially speculative feature was also displayed in the male- the lack of a mantle covering on the rostrum in mature adults [7] in Hibolites jaculoides.

After all three species were depicted, I decided that to ground the reconstruction in reality a bit more, the rostrums (or guards) should really depicted. I illustrated these, next to their respective species, in similar colours to cuttlefish (Sepiida) 'bones' which are a white-pale beige with some pink tones. While these are notably to their fossilised counterparts, they are still recognisable due to their morphology- Acroteuthis lateralis in particular due the distinctive apical groove. I'd like to think that during the Early Cretaceous belemnite rostrums would wash up on the shore of the Cleveland Basin in a similar manner as cuttlebones wash up on British coastlines.

After the original piece was painted (I am yet to update the original with appropriate text mirroring the final print), I converted it into two different pieces. The first is the plate, a single illustrated plate, including some of the basic text, and second the plate alongside detailed descriptions- mimicking modern identification guides.

The individual plate (below) shows the three species, alongside a key. After photographing the original in good light (a challenge in itself) I used ADOBE Photoshop to digitally isolate each belemnite/rostrum, and composed them on the page. This allowed me to create a pure white background- something that was severely lacking in the original photograph. 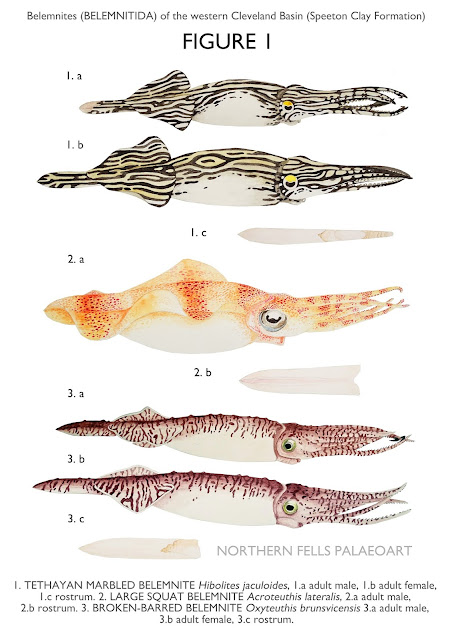 For the identification guide, I wrote a description that I divided into morphology, rostrum and habitat and ecology. Described in the morphology was the general shape, along with the size of the belemnite. The rostrum is calculated as being between 1/3 and 1/5 of the total body length [8] and this allowed me to calculate the total lengths of the 'living' belemnites based of the length of the fossil rostrums [5] and the proportions of the belemnites as reconstructed. Also included in morphology are descriptions of the fins, as well as sexually dimorphic features and colouration/patternation. The description of the rostrum is more or less fully based upon the fossil rostrums [5] and the habitat and ecology based depth calculations [9] as well as speculative/evidential behaviours. 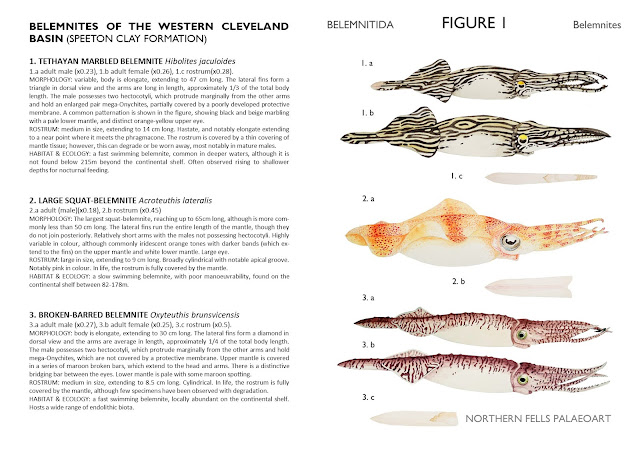 I plan to continue painting both belemnites and Speeton Clay Formation fauna (potentially Simbirskites). I'd like to reconstruct a belemnite with the colouration and flaps (papilla) of the flamboyant cuttlefish Metasepia pfefferi. I'd also like to show the sexually selected feature of a epirostrum, observed in Neohibolites minimus- a species recorded in the Speeton Clay Formation. I've also toyed with the idea of distribution maps, reconstructing the palaeogeography of the western edge of the Cleveland Basin, in a similar style to modern distribution maps as seen in ID guides.

[2]  A field guide to the Mesozoic birds and other winged dinosaurs - https://www.nhbs.com/a-field-guide-to-mesozoic-birds-and-other-winged-dinosaurs-book

[3]  Hoffman, R. and Stevens, K., (2019) The palaeobiology of belemnites- foundation for the interpretation of rostrum geochemistry. Biological reviews of the Cambridge Philosophical Society.  Accessed- https://onlinelibrary.wiley.com/doi/pdf/10.1111/brv.12557 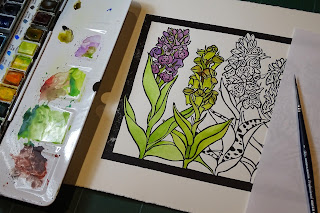 Dactylorhiza of Great Britain and Ireland, a Linocut

- Despite the last year of changes, it has been a surprisingly good year for orchid hunting- from the first green-winged orchid on Humphrey Head, to the last autumn lady's-tresses at Silverdale.  - Click here-  for a more detailed look into my orchid year and field sketches.  One of the highlights, for me personally, was the Dactylorhiza - the spotted and marsh-orchids. I found new frog orchid plants at their last site in north Cumbria (a population of three plants) and new hybrids like early marsh-orchid x northern marsh-orchid ( Dactylorhiza latirella ) at Sunbiggin Tarn. Left to right: northern marsh-orchid at Orton Verges, frog orchid at Headend Quarry, early marsh-orchid at Kenfig NNR and common spotted-orchid at Headend Quarry.  1. Planning So, I planned a linocut of the Dactylorhiza of Great Britain and Ireland based upon the taxonomy within the recently published, landmark publication of Britain's Orchids: A field guide to the orchids of Great Britain and Ireland by Se 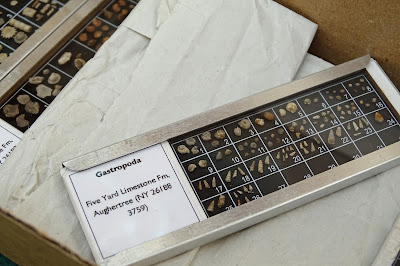 Microfossil Slides I : Collecting to Mounting

- Continuing on from the Archaeocidaris reconstruction  - click here-  here is a deeper look into my collection of Early Carboniferous microfossils. This will be split into part 1 (here) where I discuss the process of finding and mounting specimens on pre-bought (professional) microfossil slides and part 2 where I look at finding cheaper alternatives and progressing the mounting of specimens. Collecting First, finding (and collecting) the specimens. The microfossils I've collected are all from the Lower Carboniferous, specifically the Alston Formation (Yoredale Gp), from a variety of localities. While most of the sites are quarries, I've also found success with ghylls and small streams, with the fossiliferous bedrock in the bank. The defining feature of these sites is the presence of shale bands- and this is the bedrock from which the microfossils are found.  Faulds Brow Quarry, Faulds Brow and the shale band (belonging to the Scar Limestone Fm). Aughert